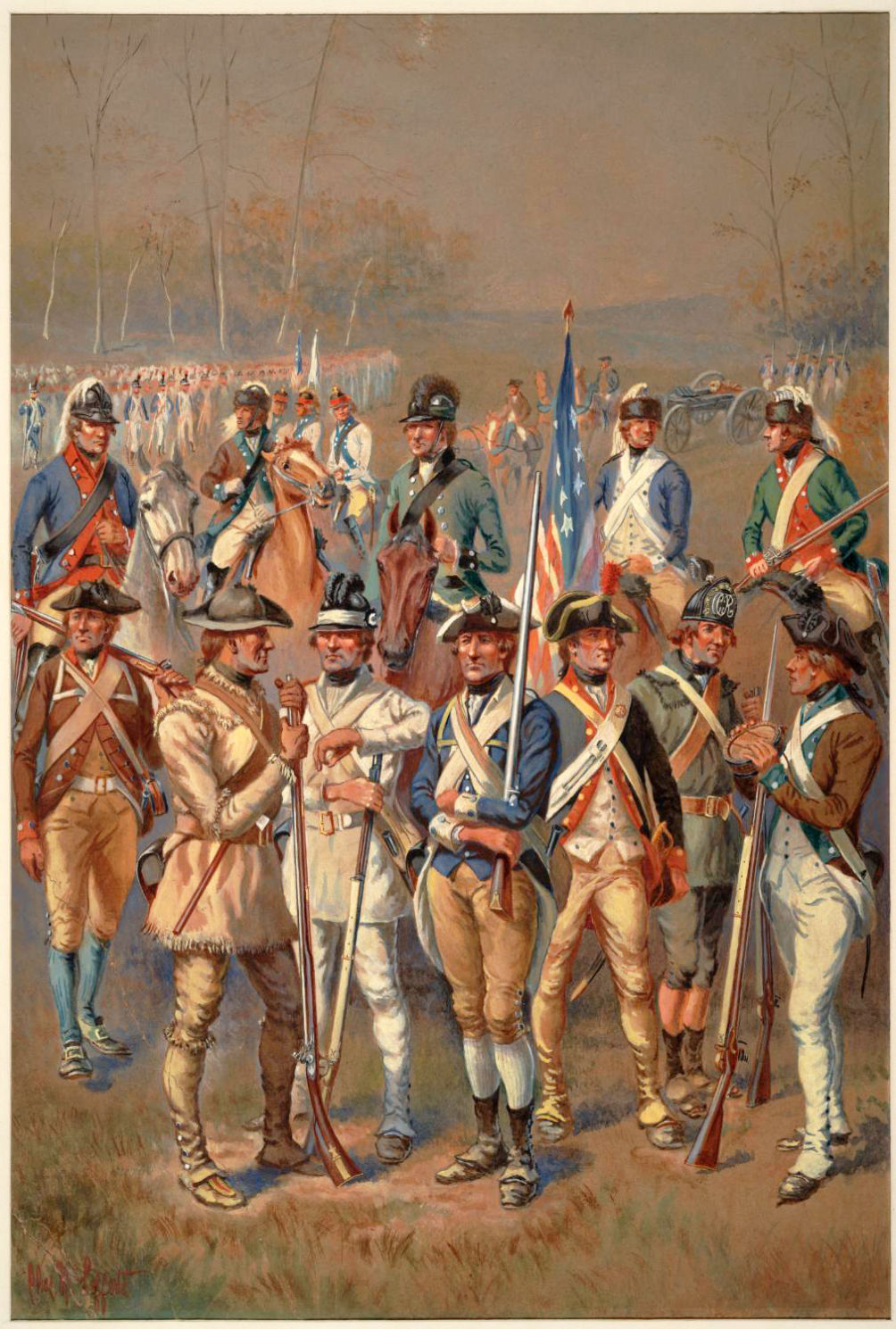 The American
Revolutionary War
in the Millstone Valley

At left: A 1909 watercolor by Charles M. Lefferts depicting a variety of Continental Army uniforms from the American Revolutionary War.

How the Landscape Shaped the War in the Millstone Valley

The Millstone River Valley, a natural north-south corridor across New Jersey’s Piedmont Plain, became an important route of travel after the Van Veghten Bridge was built across the Raritan River in 1763. This corridor was used repeatedly by armies of the American Revolution. First to come this way was a detachment of the British Army sent out in 1776 from New Brunswick to reconnoiter up the Raritan River. They rejoined the main British forces at Princeton via the Millstone valley. Washington, withdrawing after his victories at Trenton and Princeton in January 1777, turned north at Kingston and led his weary, ragged army up the alley toward the safety of the Watchung Mountains, destroying bridges as he went to hinder pursuit.

The map at left is part of the map A Sketch of the Northern Parts of New Jersey, copied from the Original by Lient I Hills, 23rd Reg, 1781. The map can be retrieved from the collection at the Library of Congress (LOC). It shows the roads that existed in the Millstone River Valley during the Revolutionary War and the rivers and the hills that provided protection to the Continental Army and militia.  The British forces were based to the east of the Millstone River, in New Brunswick and further north. The Raritan River and the Millstone River limited access to the farmland and mountains to the west, and allowed the Continental Army and the militia some secrecy in their movements. 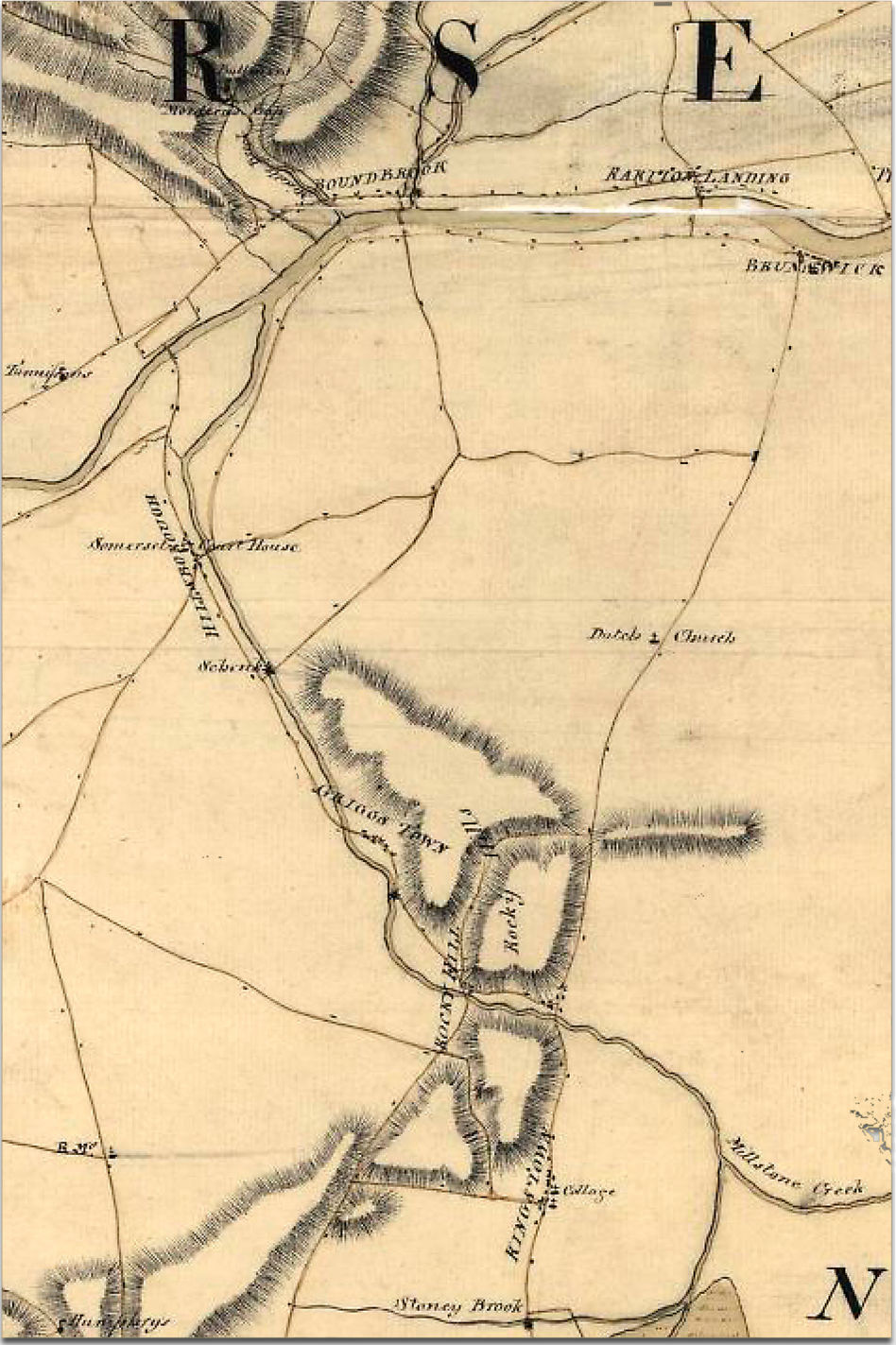 Important Events in the Millstone Valley during the American Revolution 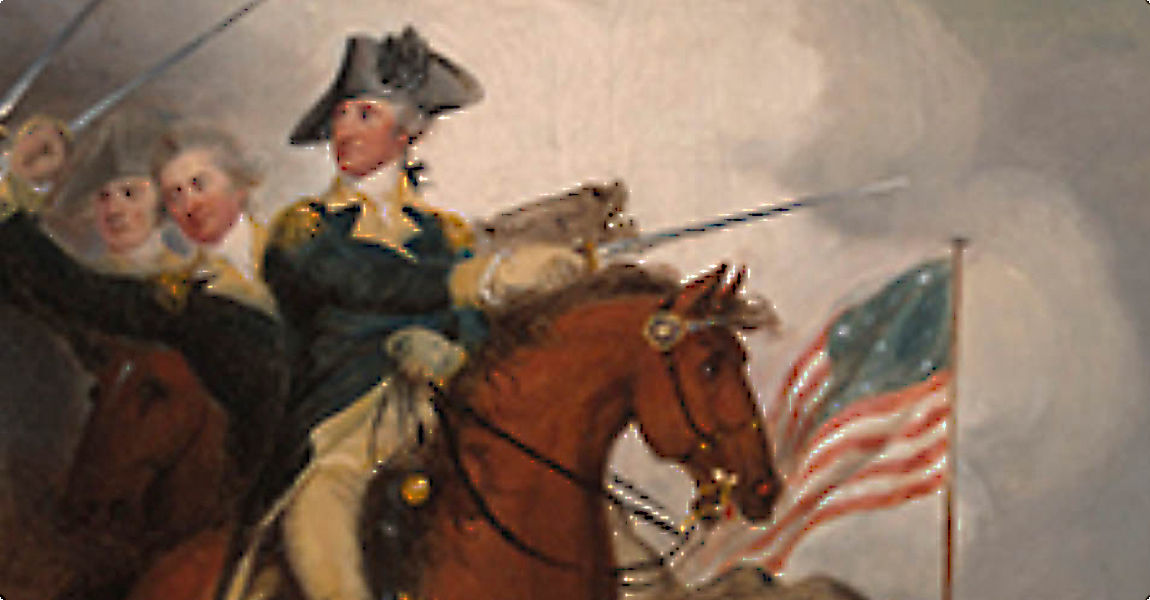 JANUARY 3, 1777: AFTERMATH OF THE BATTLE OF PRINCETON

After the victories at Trenton and Princeton in January 1777, the Continental Army turned north at Kingston and retreated up the Millstone Valley toward the safety of the Watchung Mountains. Reaching Somerset Courthouse (now Millstone) at nightfall, the army slept in barns and open fields. Washington and his staff stayed in the home of John Van Doren. Next day the Continental Army continued its march north up the valley to the hills and a rest stop at Pluckemin. 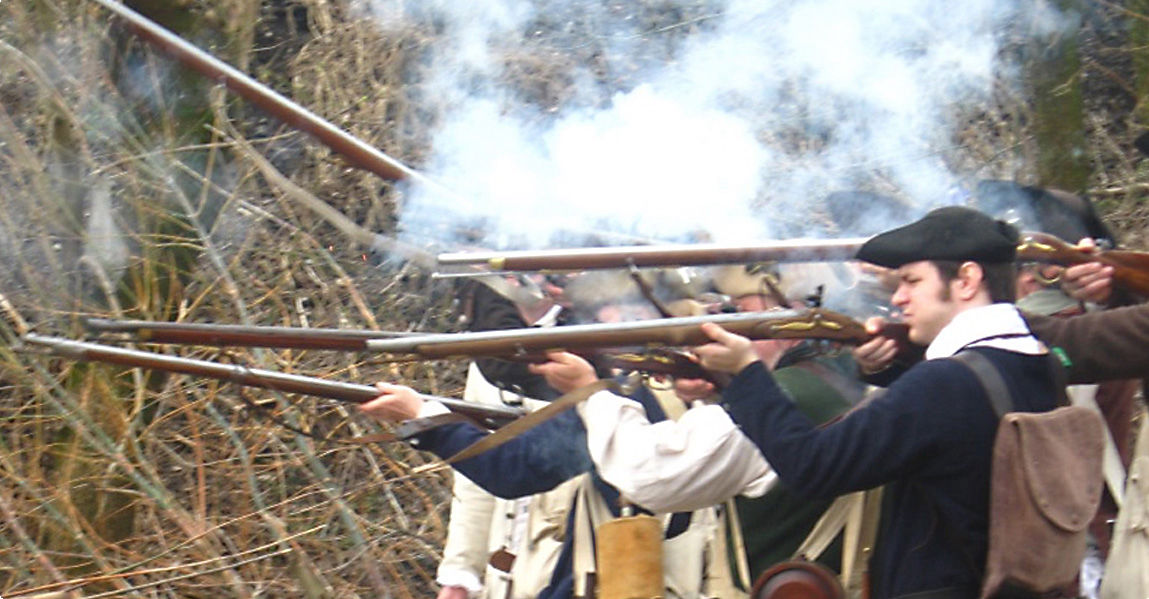 The Battle of Millstone.  A well-armed British foraging party, sent out from New Brunswick on January 30, 1777, were raiding Van Neste’s mill at Weston when four hundred militia under General Philemon Dickinson waded across the ice-filled river downstream, surprised and routed them, and captured 9 prisoners, 40 wagons, sheep, cattle, and almost 100 draft horses. This battle was an important early event in the Forage War, and ongoing series of skirmishes between the revolutionary militia and the British Army. 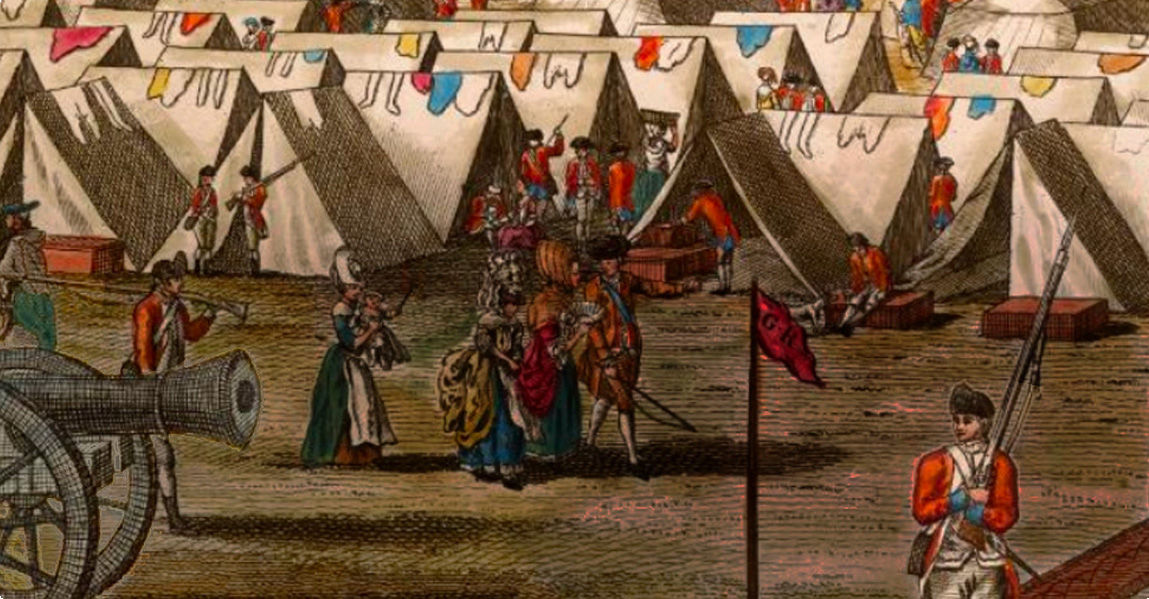 On June 14, 1777, British General Howe, hoping to lure Washington down from the Watchung Mountains into a major engagement, led over 10,000 British and Hessian troops from New Brunswick toward Middlebush and Somerset Courthouse. The British set up fortified positions in the area. Six thousand troops occupied Somerset Courthouse and erected fortifications near what is now Borough Hall in Millstone and between the Van Doren House and the river. British soldiers set fire to the Presbyterian and Dutch Churches and burned farmhouses.  Skirmishes ensued as far south as Blackwell’s Mills, but Washington refused to move from his safe position in the mountains. On June 19 Howe, having failed to bring on a showdown fight, abandoned his positions in the Millstone Valley and began a withdrawal from New Brunswick to Perth Amboy and Staten Island. 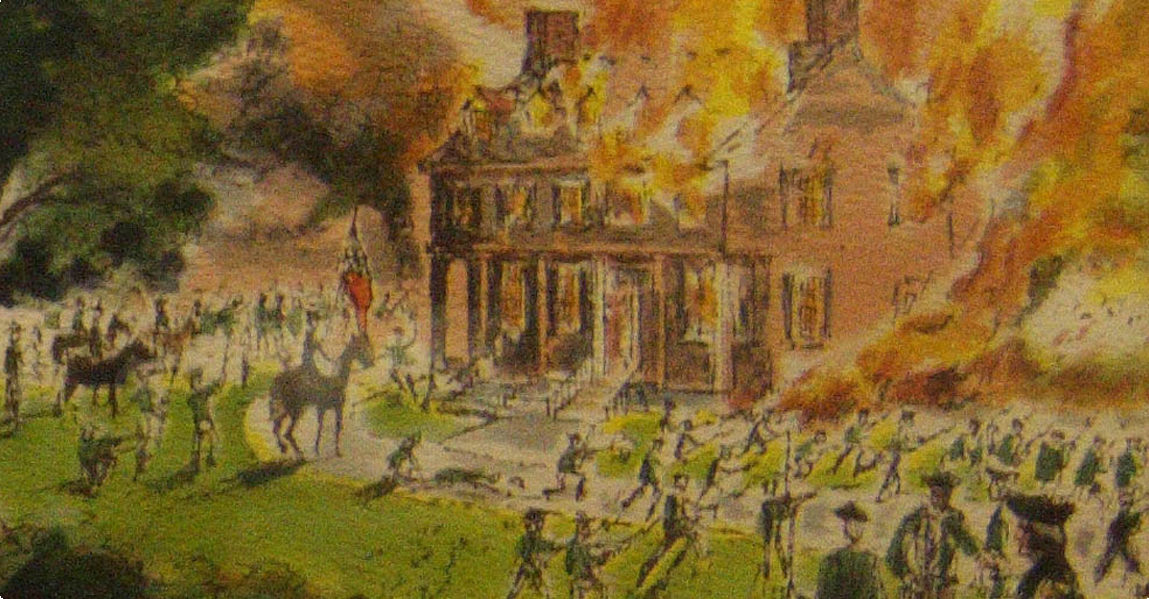 On October 16, 1778, Lieutenant John Graves Simco and his loyalist Queen’s Rangers launched a daring raid through the upper Raritan Valley, continuing down the Millstone River Valley as far as Somerset Courthouse. They arrived by a circuitous route at Van Veghten’s Bridge, set fire to the Dutch church and a number of flatboats on the north side of the Raritan River, then crossed to follow Millstone River Road to Somerset Courthouse. Angered by his discovery of half-starved British prisoners chained in the jail, Simcoe burned the courthouse, the jail, and several homes. The flames alerted nearby patriots who gave chase and ambushed Simcoes's party near New Brunswick. Simcoe was taken prisoner, but his Rangers escaped. 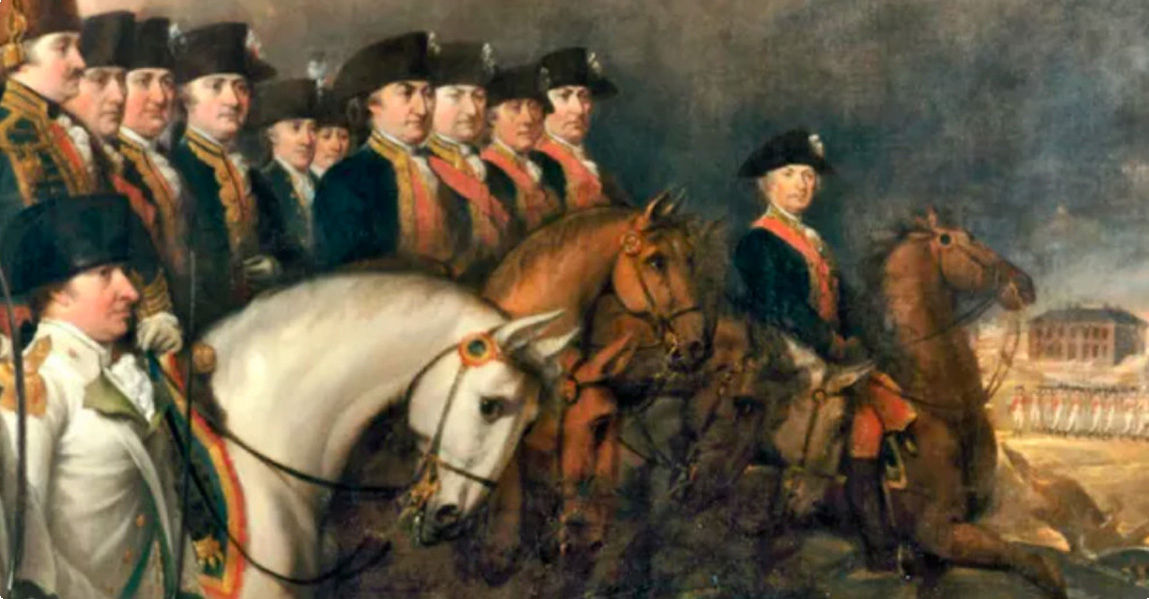 On August 29 – 31, 1781, the French general, the Comte de Rochambeau, at the head of a French army of 4000 en route to Yorktown, Virginia, followed River Road south from Van Veghten’s Bridge, camping overnight at Somerset Courthouse. On the following day the army continued south, crossing the Millstone River at Griggstown, crossing back at Rocky Hill, and continuing on to the next camp at Princeton. The next year, in September 1782, after the defeat of the British Army at Yorktown by the combined American and French forces, the French Army returned north by the same Millstone Valley route. 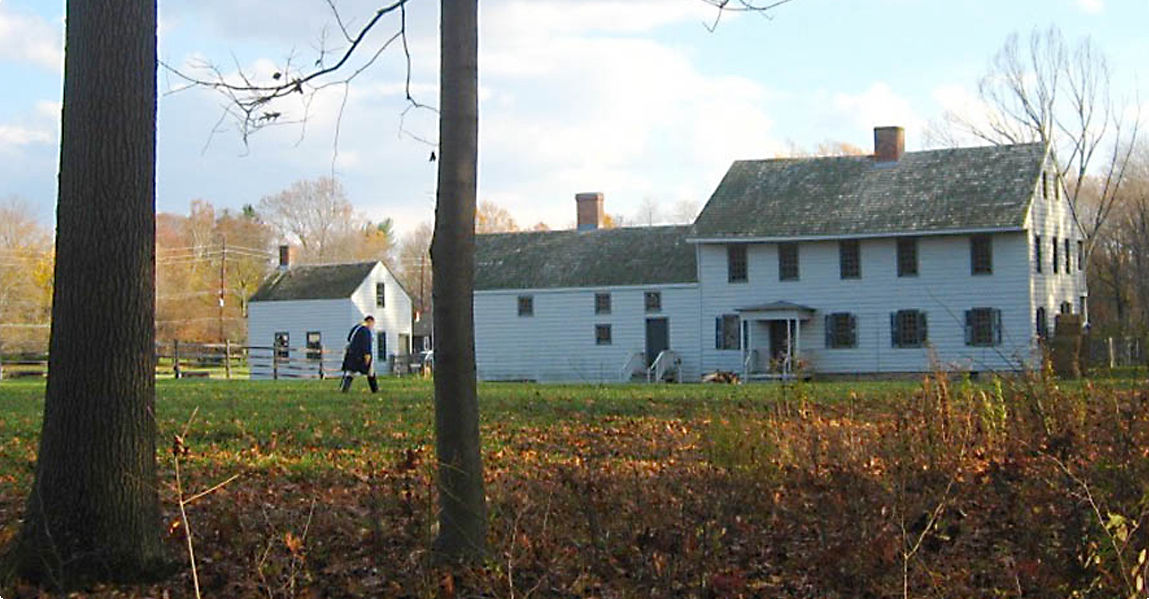 On September 3, 1783, the Second Treaty of Paris ended the American Revolutionary War. From August 24 to November 9, 1783,
the Continental Congress met at Princeton, and General Washington established his headquarters at Rockingham, home of the Widow Berrien at Rocky Hill. While there he wrote his farewell address to the army, writing, "To the various branches of the Army, the General takes this last and solemn oppertunity of professing his inviolable attachment & friendship—He wishes more than bare professions were in his power, that he was really able to be usefull to them all in future life;......May ample justice be done them here; and may the choicest of Heaven’s favors both here and hereafter attend those, who under the divine auspices have secured innumerable blessings for others." “Washington’s Farewell Address to the Army, 2 November 1783,” Founders Online, National Archives

The Battle of Monmouth

The Battle of Monmouth took place on June 28, 1778, near Monmouth Court House (modern-day Freehold Township, New Jersey). It was the culmination of 20 days of marching and skirmishing by the British and American armies. Starting in Pennsylvania, both armies marched north through New Jersey, staying mostly apart until their final clash at Monmouth. General Washington, writing to Major General Gates on June 29, described the battle in these words:

"Sir
I have the honor to inform you that at seven oClock yesterday morning, both armies advanced on each other—at noon they met on the grounds near Monmouth Court house, where an action commenced—we forced the enemy to retire, and encamped on the Field of battle—they took a strong post in our front, well secured on both flanks by a Morass and thick woods—and remained there till midnight at which time they retreated—it is not at present in my power to give a more minute account of this affair, but will have the pleasure of giving you the particulars at some future opportunity. As soon as the men are properly refreshed, I shall march towards the North River as expeditiously as the distance, and the intense heat of the weather will permit—The Posts in the highlands I make no doubt have been properly attended to and secured." From George Washington to Major General Horatio Gates, 29 June 1778,” Founders Online, National Archives

June 15 to June 28, 1778: the British and American armies leave Pennsylvania and march through New Jersey toward Monmouth
June 23 to June 26, 1778:  The Continental Army passes through the Millstone River Valley, camping near Kingston

The British army captured the American capital at Philadelphia on September 26, 1777 and remained there until 1778. That spring they learned that French troops were coming to join the revolutionary army and decided to return to their main base in New York. To accomplish this, about 20,000 British troops started to leave Philadelphia on June 15 and began a march across New Jersey. General Washington, at the Continental Army camp at Valley Forge, learned of the British plans, and responded. He dispatched a token force under Maj. Gen. Benedict Arnold to occupy Philadelphia, and moved the bulk of the American army to the northeast, crossing the Delaware River at Coryell’s Ferry (now New Hope, Pennsylvania) on June 20. Washington's plan was to shadow the British army across New Jersey, waiting for a chance to engage it and emerge with at least a tactical victory. 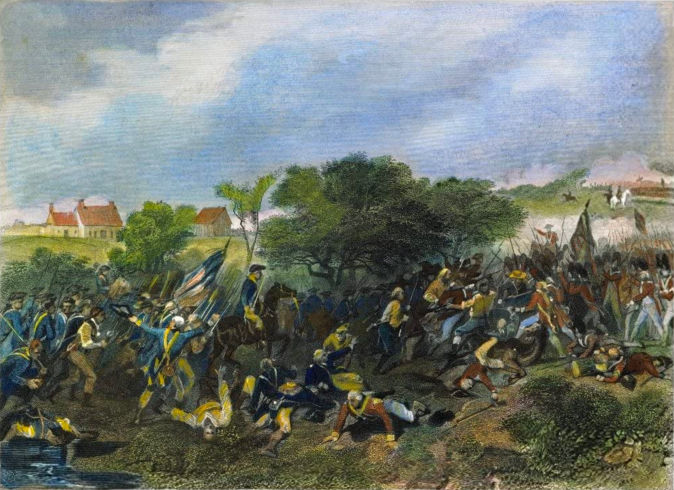 Washington and the Continental troops arrived in Kingston, New Jersey, on June 25 and encamped there that night. In Kingston, Washington and his staff enjoyed a relaxing breakfast and dinner in the woods at the Berrien house, now Rockingham. George Washington’s aide James McHenry wrote in his diary on this date:
“March to Rocky Hill. Cross the Millstone by a Bridge, & hault at Kingston. A Breakfast at Mrs. Berians —good Tea & agreeable conversation. A Dinner in the Woods—The General receives advice that the English right column Marched from Imleys Town by the road to Monmouth Court House. The Marquiss de la Fayette is detached to support Scott, with 1000 Men—with orders to take command of the whole detached Troops. The Young French Man in raptures with his commd & burning to distinguish himself moves towards the Enemy who are in motion. It is night before the Main Body of our Army Marches & then only to Laurences, 4 Miles from Kingston”  “General Orders, 25 June 1778,” Founders Online, National Archives
Three days later, the British and American armies met at Monmouth Courthouse (Freehold) and fought the Battle of Monmouth, the largest battle of the American Revolution.

The Route to Monmouth

The Continental Army, the British Army, and the Hessian regiments took separate routes across New Jersey to Monmouth, where the Battle of Monmouth took place on Sunday, June 28, 1778, in and around Freehold, NJ (then called Monmouth Court House). The map is part of a Thomas Gordon map published in 1833, showing early roads in NJ. The route is based on a map created by Schoor DePalma for the Friends of Monmouth Battlefield.