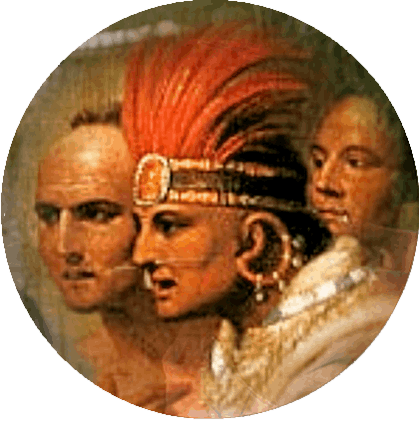 The Early Settlers of the Millstone Valley

For about six centuries during a period called the Late Woodland Period (ca. A.D. 1000 A.D. -1600) the entire region now identified with New Jersey, eastern Pennsylvania, southern New York, and the northern portions of Delaware and Maryland, was the homeland of the ancestral Lenape and related tribes. There was a sizable Lenape settlement in or near the present boundaries of the Borough of Millstone. Millstone is located in the northern Millstone Valley relatively near the Raritan River, so these Lenape may have been Raritans, a group that was a part of the greater Lenape tribes. The region was criss-crossed by trails that were used by all indigenous peoples. An important trail called the Assunpink trail came through the Millstone Valley, and crossed the Millstone River at Kingston.

The map below is a detail of a map of the New Netherlands, New England, Pennsylvania and parts of Maryland and Virginia, made in Amsterdam in 1685 by the mapmakers Jansson-Visscher. It shows the names of various indigenous tribes. Written beside the Raritan River are the names "Raritan" and " Sanhicans", both part of the greater Lenape tribes living in what is now southern New York, New Jersey, and Pennsylvania. These are the tribal names recorded by the earliest Europeans to settle around what is now NY harbor. 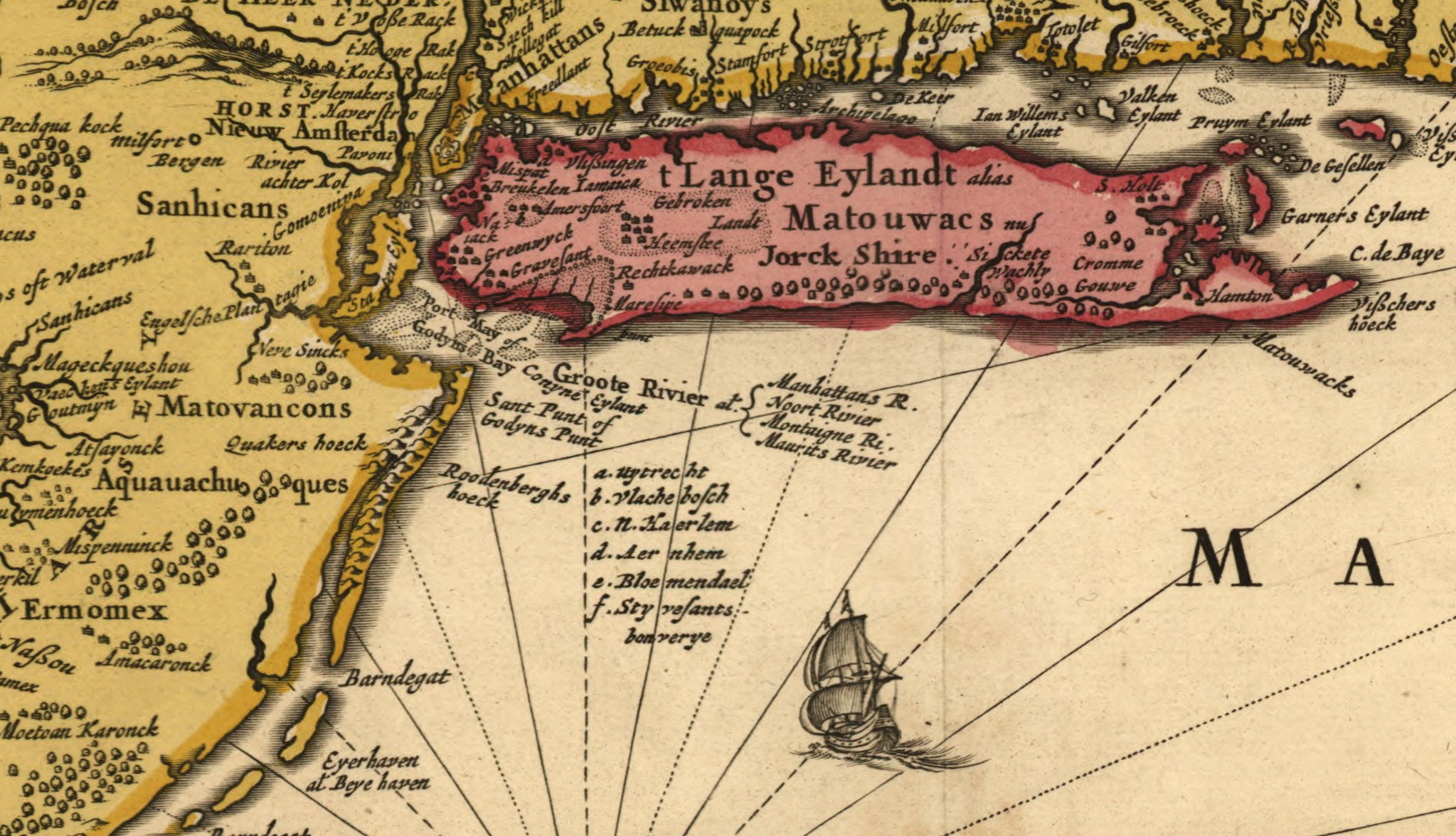 The Lenape who lived in the Millstone valley were the Unami: "people down river". They occupied the northern two-thirds of New Jersey (including Staten Island) and the adjoining portions of eastern Pennsylvania to just south of Philadelphia. In central New Jersey, there was another name for the local tribes. Those who lived along the Raritan River in central New Jersey were called the Raritangs, or Raritans. Cornelius Van Tienhoven, the Secretary of the New Netherlands, describing the area where the Raritans lived in 1650, wrote:

“The district inhabited by a nation called Raritangs is situated on a fresh water river that flows through the centre of a lowland which the Indians cultivated. . . . This is the handsomest and pleasantest country that man can behold. It furnished the Indians with abundance of maize, beans, pumpkins and other fruits. . . . Through this valley pass large numbers of all sorts of tribes on their way north and east. This land is, therefore, not only adapted for raising grain and raising all descriptions of cattle, but also very convenient for trade with the Indians.” (The Documentary history of the state of New-York; arranged under direction of the Hon. Christopher Morgan, secretary of State. By E. B. O'Callaghan ... O'Callaghan, E. B. ed. (Edmund Bailey), 1797-1880., New York (State). Secretary's Office.) 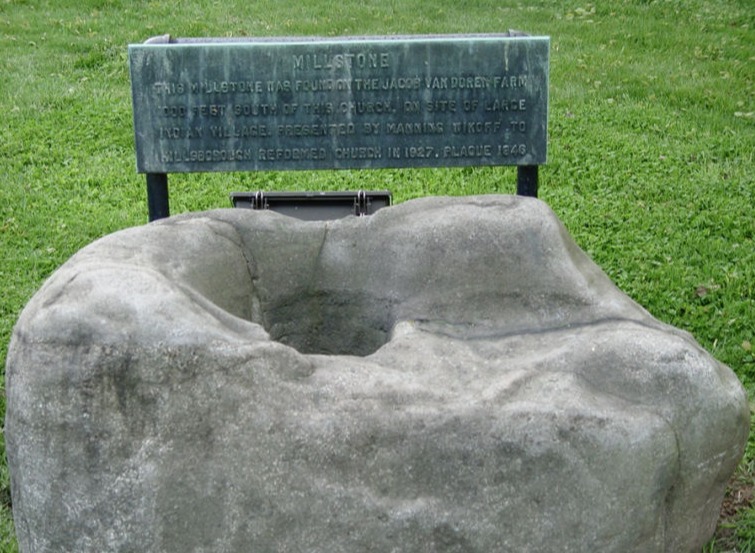 A Native American Mortar found in the Millstone Valley

The Indian mortar at left was originally used for grinding corn. It was discovered locally on the Van Doren farm in Millstone, and is now located in front of the Hillsborough Reformed Church, also in Millstone. The plaque accompanying the mortar states that there was once an Indian village one thousand feet south of the Church. A similar mortar in front of the Millstone Forge on North River Street in Millstone was originally found in East Millstone. Other Lenape artifacts have also been found in areas near East Millstone. 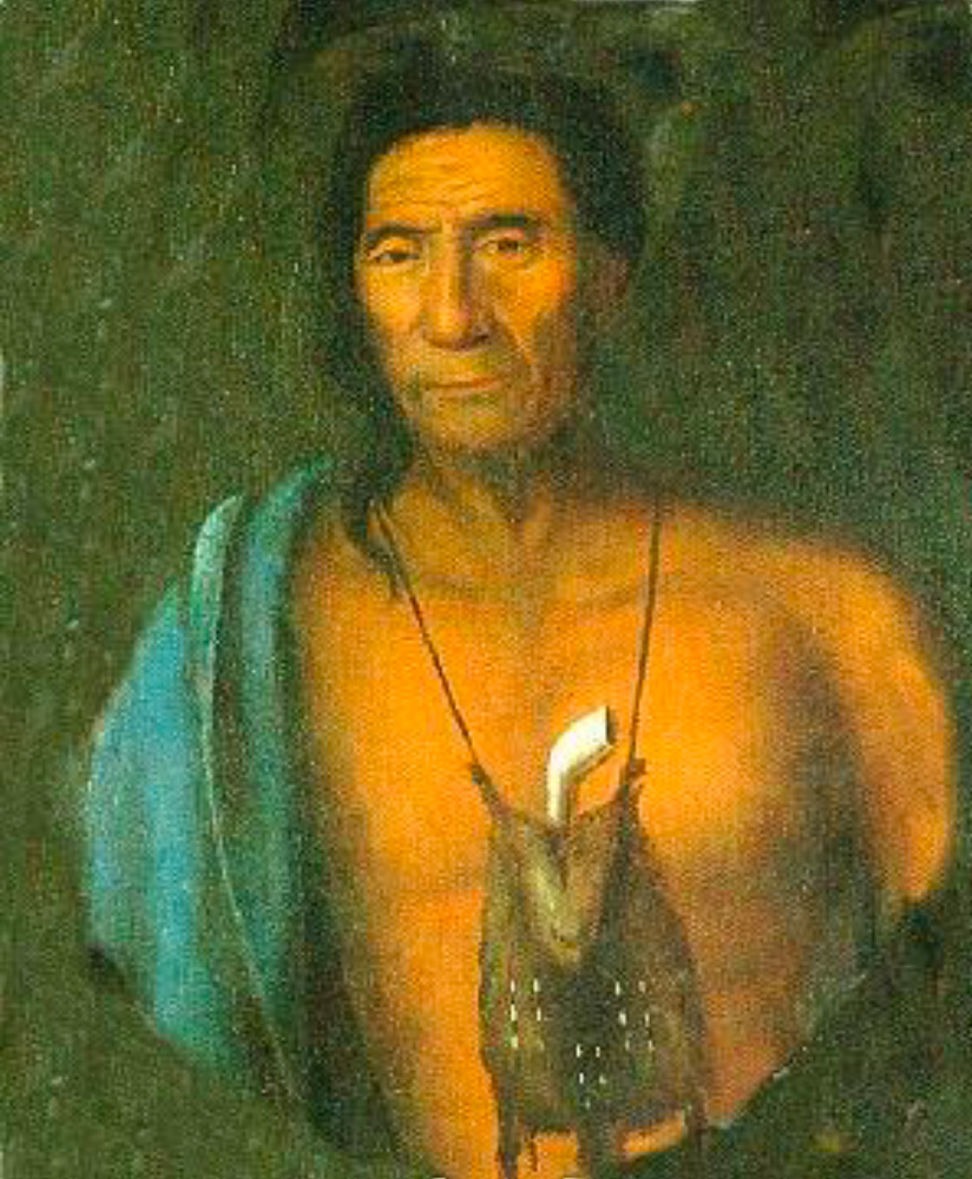 This is one of the first paintings of a Pennsylvania native. This image is quite different from most of the other early images of the Lenape. Painted from life, it shows us the true humanity of this important person. Tishcohan was a Lenape chief who eventually agreed to sign the Walking Purchase, a treaty with the Penn family that later caused the Lenape to lose much of their land in the Delaware Valley.
It is generally imagined that treaties between whites and Native Americans involved easily fooled natives into giving land away, addled by alcohol or unaware of the ramifications of what they signed. The Lenape leaders involved with the Walking Purchase were wise men who were forced into an agreement that seemed fair, but was not. In Albert Meyers’ collection of some of William Penn’s works, William Penn, His Own Account of the Delaware Indians, Penn is quoted as believing that “he will deserve the Name of Wise, that Outwits them in any treaty about a thing they understand.”

To understand how land was awarded in colonial times, read The Story of New Jersey Civil Boundaries 1202-1968 by John P.Snyder,
a New Jersey Geological Survey reprinted in 2004. 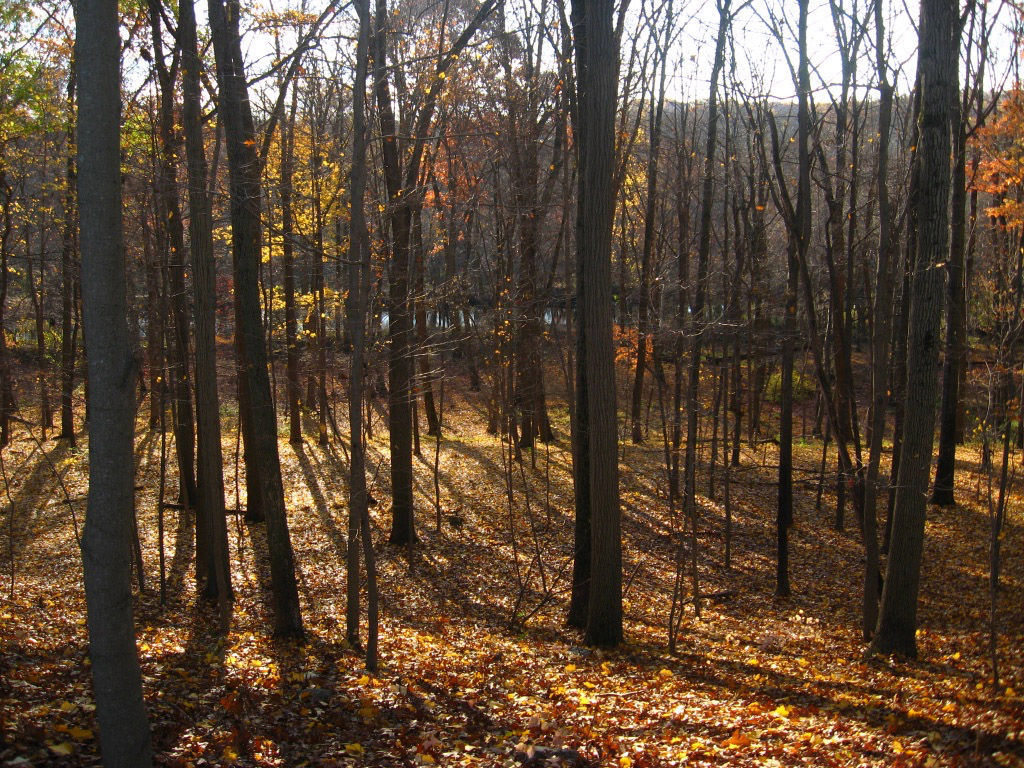 The Assunpink Trail
A Lenape Trail in the Millstone Valley

The southern end of the Millstone Valley Scenic Byway passes through the village of Kingston. Kingston's location on the Assunpink Trail where it crossed the Millstone River and later became part of the King’s Highway, was an important factor in the early prominence of this village. The Assunpink trail was part of a complex system of Indian trails that crisscrossed the northeastern states, enabling Native Americans to travel throughout territories inhabited by many different tribes.

At right, a view of the Millstone River flowing through forest near Kingston NJ. This is near the point where the Assunpink Trail crossed the river.

To see the Indian trails of central New Jersey, see the map below.

This map shows various Indian trails that crisscrossed New Jersey. The Assunpink Trail goes from the lower left on the Delaware River and continues northward, crosses the Raritan River and heads for Staten Island. The map is included in the The Story of New Jersey Civil Boundaries 1202-1968 by John P. Snyder, at https://www.state.nj.us/dep/njgs/enviroed/oldpubs/bulletin67.pdf


Learn More About the Lenape

Unlike the European nations in the eighteenth century, the Lenape were not a monarchy nor were they politically unified. Among the Lenape there was a confederation of towns and villages. Their government was a participatory democracy, with councils presided over by chiefs, known as sachems, whose authority came from their power of persuasion. The political focus of the Lenape was the village which was generally inhabited by a few hundred people.
The Native American Language Organization website provides links to websites about the Lenape, covering various aspects of their society, and information about their forced migration westward. The link below will take you to their site. 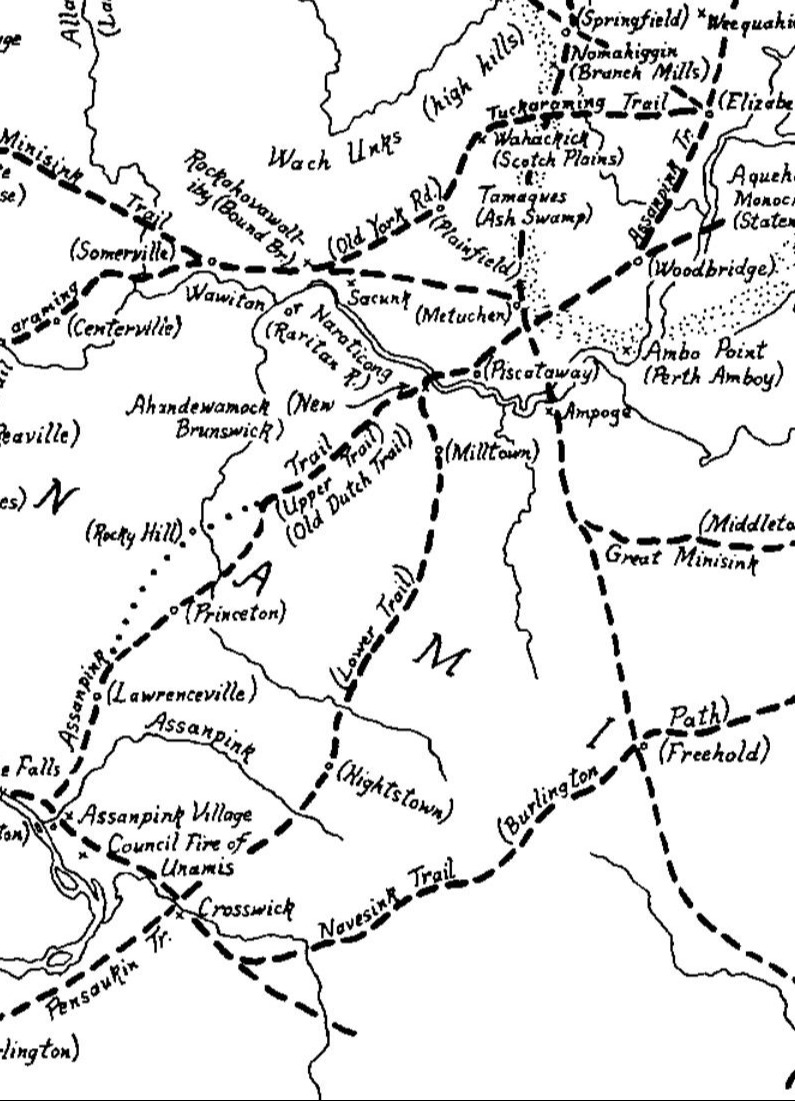 Looking deeper:
How the Lenape lived

Some Lenape living quarters were grass and bark-covered longhouses. Members of the large Lenape nation of indigenous people built different structures depending on location and need.

The Lenape had a rich material, artistic, and religious culture. The New Jersey State Museum in Trenton has a long history of collecting evidence of this culture and exhibiting it in ongoing and special exhibitions. 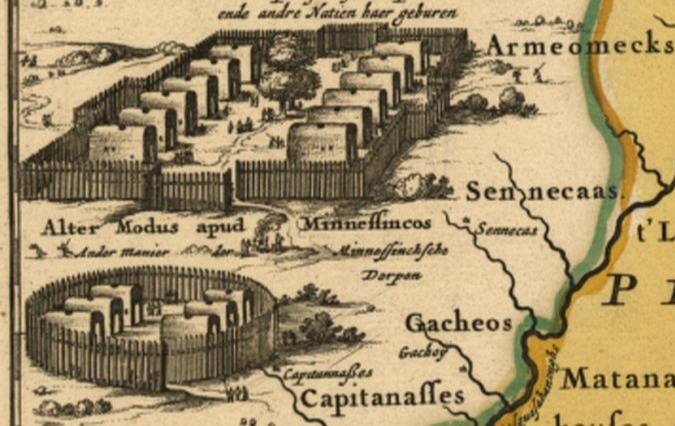 Some Lenape living quarters were grass and bark-covered longhouses. Members of the large Lenape nation of indigenous people built different structures depending on location and need. 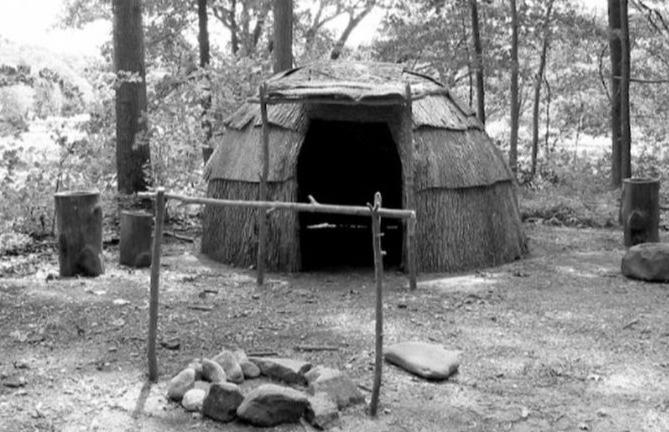 Many Lenape lived in round houses made of wood, bark, and bark fibers called wigwams To learn how to build one, visit the Woodland Indian Educational Programs website. Click below. .